POSTPONED DUE TO THE CORONAVIRUS

The FA has today marked 100 days to go until the start of UEFA EURO 2020 by launching THE FA FIVES – a nationwide five-a-side football festival that is set to captivate the nation ahead of this summer’s European Championships. 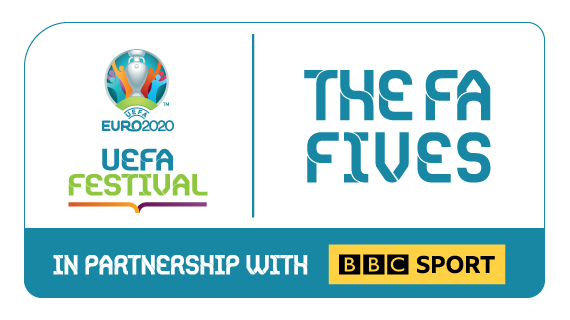 Funded by the Government via Sport England and promoted in partnership with BBC Sport, THE FA FIVES will be the nation’s largest and most inclusive five-a-side football event to date. More than 5,000 teams and up to 50,000 participants are expected to register a team into one of the 15 categories on offer, which include U14, U16, adult, veteran, disability and walking football provisions for both male and female players.

Events are set to take place at over 120 venues across the country, providing an opportunity for thousands of people to get involved. The fun kicks off on the 2-3 May, with teams looking to progress to one of five festival-style Regional Final events on the weekend of 30-31 May. THE FA FIVES will reach its climax with a very special National Finals weekend played against the backdrop of the iconic Wembley Stadium on the 12-13 June – the same weekend that UEFA EURO 2020 gets underway in Rome.

The FA is working with Rio Ferdinand, England’s ambassador for UEFA EURO 2020, to get as many teams across the country registered for the event before the sign-up period closes on 23 April.

Speaking about the initiative, Rio said: “If having the chance to watch England on home soil this summer wasn’t exciting enough, people all over the country can now dust off their boots and get involved in a football festival of their own. “It’s great to support such an inclusive initiative – one that’s completely free to enter and has provision for so many different people, regardless of their ability or background. With just 100 days to go until the tournament starts, there really is no better time to give football a go.”

Chris Bryant, The FA’s Head of Tournament Delivery, said: “For Wembley Stadium to host seven games at UEFA EURO 2020 is a real privilege, but also an extremely exciting prospect for the whole country. We’re delighted to be able to deliver this inclusive event giving people of all abilities the chance to be part of it – whether that be playing for the first time at a Round One event or supporting friends and family at a Regional Final. We’re grateful to our partners and stakeholders for their support in delivering THE FA FIVES and look forward to watching the fun unfold this summer.”

In its 60th anniversary year, UEFA EURO 2020 will be the biggest celebration of European football in history, with the hosting shared by 12 cities across Europe – including London – for the first time. Wembley Stadium will welcome over 600,000 fans when it hosts seven games next summer, including both semi-finals and the showpiece final.

THE FA FIVES is one of many initiatives taking place to celebrate UEFA EURO 2020 this summer. In the capital the Mayor of London, Sadiq Khan, is working with boroughs and other organisations to ensure that Londoners from all walks of life and backgrounds can share in the joy and excitement of the tournament. Throughout the competition there will be fan zones, cultural activities, interactive public art, as well as Mayoral funding for grass-roots community groups and initiatives. The family-friendly Greenwich Fan Zone will screen England games, the semi-finals and the final for 30,000 fans, who will be able to apply for free tickets via a ballot in due course.

Sports Minister, Nigel Huddleston, said: “Major sporting events have the power to bring the nation together and inspire people to take up sport, boosting both physical and mental wellbeing.

“UEFA EURO 2020 is a golden opportunity to host some of the best footballers in the world, and to get more people from all backgrounds into the sport.

“I encourage people of all ages and abilities to get involved in THE FA FIVES, a festival that I hope will capture the imagination of the nation and offer the public their own chance of glory at the home of football.”

The Mental Health Awareness for Sport and Physical Activity training is now free until...

This year people throughout Somerset - as well as any visitors to the area...

As part of this year’s International Women’s Day Wesport are showcasing some stories of...